This drawer (the fourth down, on the left) , is now (July 2019) unlocked, opened and labelled Walter Segal. Now there are books contracted and underway – Walter Segal: Self-built Architect by John McKean & Alice Grahame (Lund Humphries) and  Walter Segal by John McKean in the ’20th century English Architects’ series which The 20th Century Society with RIBA and Historic England set on a fine trail and of which University of Liverpool Press have very recently taken the reins.

Here are a jumbled few posts (the Segal, part thingie series) and yellowing cuttings over recent years regarding an ongoing interest in Mr. Segal.  However, elsewhere in this filing cabinet is a large envelope labelled Walter Segal (goodness, it turns red when you hover over it!), and in there are found various substantial, pre-digital texts I have written about Mr. Segal, mostly centuries ago, which anyone interested is welcome to steal as downloadable pdf files. 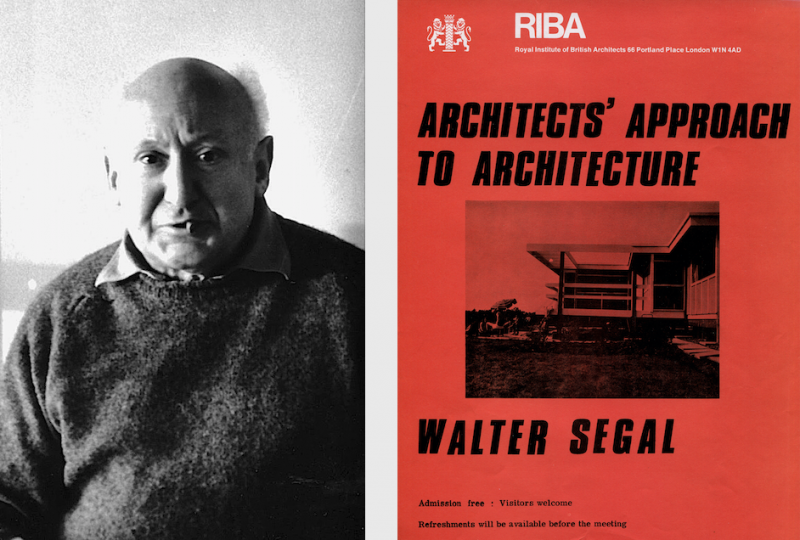 Walter Segal talking through the space left alongside his cigar, sitting in the first self-built house in his system, Mr and Mrs Holland’s house, seen in poster on right. Both photographs: John McKean

I may add links to other views on Segal as time allows, but a good starting point is a brief introduction to Segal by Colin Ward which you can read here. Meanwhile my colleagues Alice Grahame (author) and Taran Wilkhu (photographer) in 2017 published attractive tales of life in two idyllic Segal streets, self-built 40 years ago in London by people on the local authority’s list of those in housing need; it can be bought here and elsewhere.  Alice has also started this useful Segal-news website here, while a range of Taran’s great pictures of the interiors in 2017 are also seen here.