The two Insiders/Outsiders events on Thursday 8 July 2021, focused on Arthur Segal and then Walter Segal have, within 48 hours, generated yet more fascinating snippets.

Both sessions are now on the web, at the Insiders/Outsiders Youtube channel, here!

I have been shown Dan Teodorovici’s article on Walter Segal published in December 2018 by Friends of Marlowes here. What a pity we didn’t know of this useful short German-language introduction to include in the new book’s bibliography.

A different participant from Berlin pointed out that Lewisham (where Walter Segal’s only self-build for a housing authority was actually built) had been twinned with Charlottenburg (where the Segal family lived and Walter studied architecture) back in 1968. Did Segal know this? My Berlin correspondent amuses himself, every time he crosses Lewishamstraße, wondering how the locals pronounce it.

Myriam’s friendship with the family of Bernhard Mayer, the key patron of Arthur and the first patron of Walter, continues to this day. She participated from the Netherlands on Thursday and has added further important thoughts to me today:

Walter Segal was not an ideologist of sustainability – I would rather describe him as anti-dogmatic – but sustainability was a consequence of his matter-of-fact approach, an undercurrent of the method. Within the method, trying to produce as little waste as possible is an economic goal that has ecological benefits.
What we at the hfg Ulm had in common with Walter Segal, is leaving behind the architect as a hero and the author of unique works of art. But in Ulm, the ideal result of the designing process was to be mass production. The one-to one relationship to the patrons which Walter had, is certainly a big difference. Another difference is Walter’s acceptance of imperfection, which makes it easier to leave the implementation in the hands of unexperienced self-builders.

It is ironical that it takes a housing crisis to return to Walter Segal’s way of thinking and doing. I think it would be interesting to look at all the forces in all these years which prevented the seed from spreading and taking root in the whole world.

This morning Mary and I visited an exhibition of paintings by Rebecca Weissbort.  She was also showing some paintings by her late husband, George Weissbort, which – I mentioned to Mary – reminded me of Arthur Segal’s late style. The artist overheard us, and we soon established that her husband (who had been 20 years older than her), had in fact been a pupil at the Arthur Segal (& family) painting school in Oxford at the start of the 1940s. A most unexpected link. 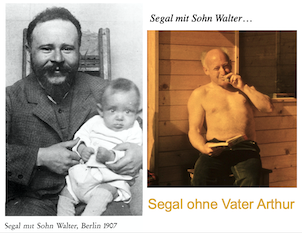